Read all about it!

Welcome to our new occasional series of blogs about Southbank Printmakers and their printing techniques.   I’ll be visiting our members in their studios, at their printmaking workshops and exhibitions and finding out about them and their practices.


For this first profile, I visited Liz Whiteman Smith as she created a new screenprint at Print Club London. Liz makes witty, charming images of London landmarks, dinosaurs, and the bird known as the booby. 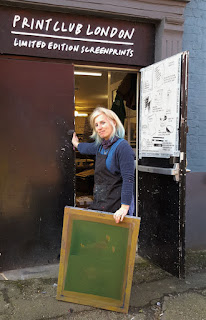 Screenprinting is a stencil- based process in which ink is pushed through a fine mesh screen onto the paper or alternative surface.   It has been around a long time – it was used in China from the 10th century.  Fine art screenprinting is rather more recent; it started in America in the 1930s, when a group of artists formed the National Serigraph Society. It became more widely known when artists such as Robert Rauschenberg and Andy Warhol started to use it. 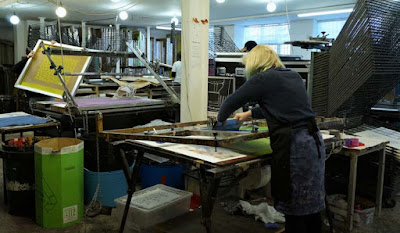 Liz explains how she got started, over 6 years ago.  ‘I used to paint in oils, and I was getting a lot of feedback from people telling me my work was flat and graphic, so I thought I should try printmaking.   I took a course at Print Club where I now print two to three times a week. ‘


A few years ago Liz took part in an exhibition about Darwin: ‘I came across the blue footed booby, a bird with bright blue feet. Darwin was all about evolution so I decided to make them more colourful…I used to teach maths and I love patterns and tessellation; drawing patterns for the different boobies was a challenge and good fun.’ 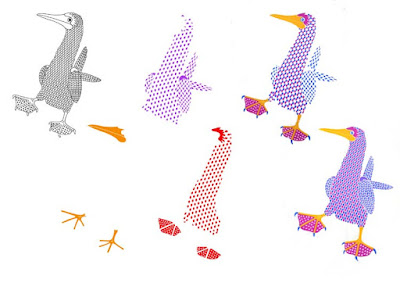 To make a multi-layered screenprint, the artist starts by sketching the image, and then breaks it down into a layer for each colour.  A stencil is made for each layer. This can be made with paper or by painting with various solutions onto the mesh.  Liz starts her photographic stencils by drawing the image in Photoshop using a graphics tablet.  She then separates it into several colour layers. She prints each layer in black onto a sheet of transparent acetate then places those on a screen which she has coated with a light sensitive emulsion. Once exposed to powerful UV light, the positive areas of the image which were protected by the black stencil image wash away, allowing the ink through the open areas to make the image. 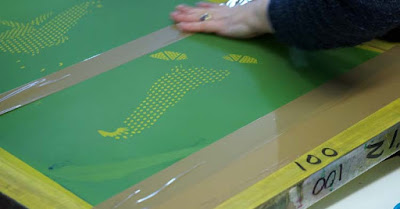 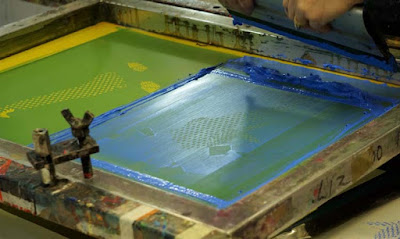 The printing paper is carefully lined up with each new screen for the next colour layer. This requires very precise registration.  One method is to print the layer onto a sheet of acetate first, and then line up the paper underneath it so that the new layer aligns with the previous layers. 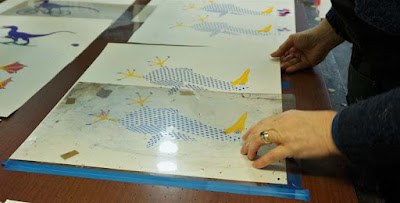 Liz enjoys experimenting and learning new processes and techniques. Which is just as well, because, as she observes; ‘ When you think you have mastered printing, it throws a curve ball at you and things go wrong, the ink dries up, registration is off. Often you just have to start again. ‘

Liz’s work is permanently on display at Southbank Printmakers Gallery, Gabriel's Wharf, London, along with work by all our members. The gallery is beautifully situated on the Southbank and is a friendly place to browse and meet the printmakers.  You can see a wide selection of our printmakers' work here.

There are a number of variations on the screenprinting technique, including screen monoprinting, and hybrid printmaking, which I will feature in future blogs.   I will be looking at a wide range of  techniques, including etching, aquatint, engraving, mezzotint, collagraph, linocut and monoprint.