An encounter with HIL SCOTT 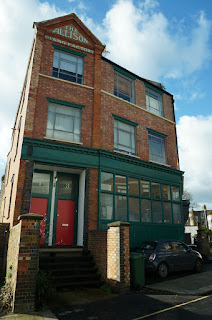 For the second in our series of articles about members of Southbank Printmakers and their techniques, I visited Hil Scott in a former piano factory.  She has had a small print studio in this characterful Victorian building for twenty years.  It is, Hil says, ‘small but perfectly formed…it has everything I need, and the company of a friend.’ 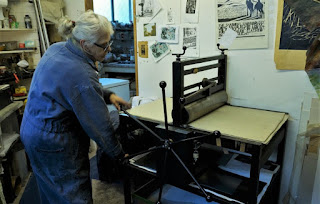 A highly experienced printmaker, Hil makes haunting photo etchings of the changing face of London, as well as lyrical images of the natural world. 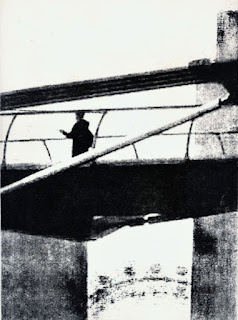 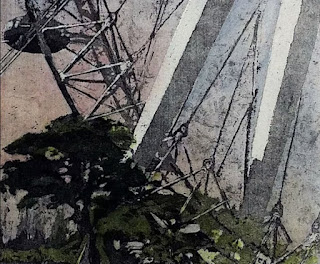 
Hil has been a member of Southbank Printmakers for six years, but her printmaking career stretches back much further. She made her first lino cut at around six years old, at a class given by two artists who lived in her Kent village. She has been printing ever since, and went on to study at the City and Guilds School of Art in Kennington, while also raising a family.  ‘I learned etching and stone lithography, wood and copper engraving.  Hil has always worked, combining her art practice with her landscape gardening business. ‘I have almost always had at least one solo exhibition a year.’


Hil is a remarkably versatile printmaker. ‘I have been intrigued and fascinated by printmaking of all kinds and have used most forms, intaglio, wood cut and wood engraving, lino cut, silk screen and lithography. More recently, I have been working with photo etching, and now solar etching.

On the day of my visit, Hil was making a new edition of an etching from a plate she made more than 20 years ago – a stunning drawing of an ancient olive tree. 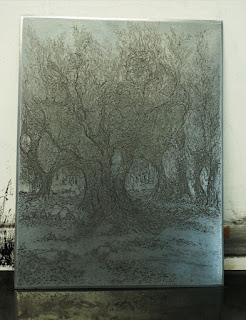 The standard etching technique involves creating an image on a metal plate by coating the plate with wax, then drawing into that ‘ground’ with a needle or similar tool. The drawing has to be made back to front. The plate is then immersed in acid, to ‘bite’ the exposed image into the metal where the needle has removed the protective wax coating.  The rest of the wax is removed, and then printing ink is worked into the lines etched into the metal. 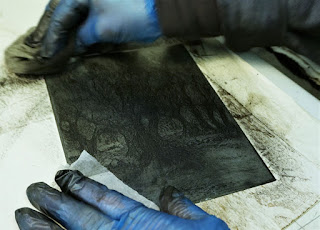 The excess ink is carefully removed to reveal all the details. 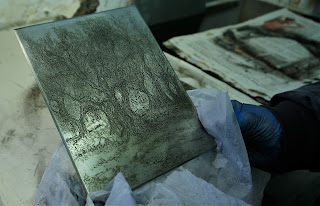 The plate is then run through the printing press to make the edition, on paper which has been thoroughly soaked and blotted beforehand. 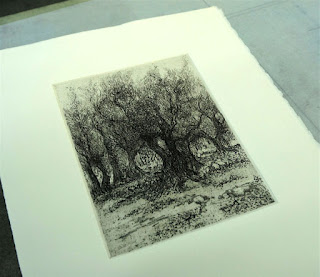 In recent years Hil has been inspired by the profound changes in the face of London, in areas  such as King’s Cross; ‘the demolition of buildings and the rebuilding of new, the movement of people through the city and the oddities of detail and reflection and strange corners that occur in a large city.’  She now has quite an archive showing how locations have evolved over the years, from demolition, through dereliction to re-development.


To capture all of this, Hil took up photo etching, which she sometimes combines with a drawn element.  In this technique, the plate is covered in a photo sensitive emulsion. An image is drawn and/or printed onto clear acetate film. This is laid onto the plate which is then exposed to ultraviolet light. Where the light is blocked by the opaque positive image, the coating remains soft and can be developed away, exposing the metal plate, ready for the acid bath. 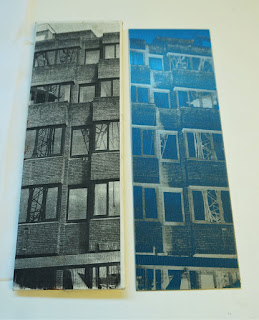 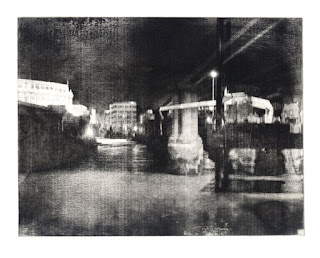 Blackfriars bridge, nightime lazered
Etching is as prone to technical hitches as any form of printmaking, but Hil takes a relaxed approach, finding ways of making a ‘mistake’ work for her.  ‘I’ve never been a perfectionist’  ‘Oh, we’ve got foul bite again… hey ho’ she says.   While it might sound like a medieval affliction, foul bite is the effect of tiny amounts of acid leaking through the ground to create minor pitting on the surface. In the case of Hil’s olive tree, it adds an extra element of texture to the print. There’s a lot to be said for the pragmatic approach when dealing with something as unpredictable as printmaking.


Hil is putting in the hours at the moment, in the run up to showing work at the Affordable Art Fair in March, with several other Southbank members:  https://www.northlondonprintmakers.com and she will be participating in the Pullens Yards Open Studios in Kennington in June: http://pullensopen.org/
Her beautiful work can of course be seen all year round at the Southbank Printmakers Gallery at Gabriel’s Wharf, and on her own website:  http://www.haphashad.co.uk/
Check back in with us in April for a special edition of this blog when I will be covering Southbank Printmakers'  20th Anniversary exhibition in Richmond upon Thames.
Alison Lumb